SELF-GUIDED TOUR
All our Free Rider tours can be made in self-ride mode. In this case you choose the dates, the hotel category and the meals included, and may add some rest days.

Let yourself being bewitched by an island like no other!

A splendid tour to explore beautiful Sicily with its Valley of Temples and the Etna, its thousands of Baroque churches and its enchanting villages made of white stones. A journey with myriads of colors, packed with sea panoramas and spectacular coastal roads, roaming from the oldest civilizations among the archaeological sites of the Magna Graecia up to the most recent historical testimonies of all styles … We’ll acquaint you with the extraordinary reality of the most peculiar island in Italy.

Alternatively, this can be run as a private guided or self-guided tour, where you choose your own dates, as well as the levels of hotels and number of meals included. Ask us for a quote!

More about the tour 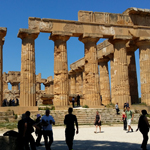 Sunny Sicily, the biggest island of the Mediterranean sea, is an astonishing place. Through the centuries it has endured every kind of invasion: from the Greeks to the Romans, the Arabians and the Normans, who all together made of it what it is now: a place with an incomparable, eclectic culture and a very peculiar allure. With its many architectural styles, its gorgeous landscapes, its strong personality and the amazing sight of the erupting Etna, Sicily is an island like no other.

An unparalleled journey through unique fragrances, flavors and panoramas awaits, not to mention its outstanding cuisine and its extraordinary tradition of fine and gourmet desserts.

With more than 5 million inhabitants, Sicily is the only Italian region which counts two of the 10 most densely populated cities in the country: Palermo and Catania.
Inhabited since the most ancient times, the first traces of human life found on the island go back to 12.000 B.C. Many cultures bloomed in the proto-historic era. Many other populations settled in the island later on, among which the Sicels, the Sicanians and the Elymians. Then came the Phoenicians and the Greeks above all, who for the subsequent 600 years made of Sicily a great battlefield for the Greek-Punic and Roman-Punic wars. Therefore it was easy for the Romans to subjugate the island that became part of their Empire until its fall during the V century A.C.

So it was a land of conquest. During the Dark Ages the Vandals, the Ostrogoth, the Byzantines, the Arabs and even the Normans took possession of the island; the latter founded the Kingdom of Sicily. Later it was conquered also by the Angevin family, then by the Aragon dynasty which later made of it a vice-kingdom of Spain. It became then land of the Savoy family, of the Austrian crown and lastly of the house of Bourbon, who, by joining the Kingdom of Sicily with the Kingdom of Naples, created the Kingdom of the Two Sicilies. Sicily was reunited to the Kingdom of Italy in 1860 through a referendum proposed after the Expedition of the Thousand guided by Giuseppe Garibaldi during the Risorgimento which brought to life the first united Italy. From 1946 Sicily, constituted as an independent region with a special administrative status, has again its own parliament, that had been established even before the birth of Italian Republic.

All these historical vicissitudes have obviously left a multitude of testimonies and monuments everywhere, which made of Sicily one of the most captivating areas of the country from both the historical and cultural point of view, in addition to being an island of undeniable panoramic appeal. And thus we disclosed the secret of its great popularity.

After many millenniums of invasions and changes of ruler, Sicilians were able to blend the many bloods that flow in their veins into a proud population with a strong identity which hardly bends its back before the instituted power. Nonetheless with friend-visitors they are the most gentle, caring and welcoming housemasters and no one is exempted from a little heartache when leaving their homeland after having experienced all the good things and amazing places it offers.

Day 1: Arrival in Palermo
Individual arrival of all participants in Palermo which we recommend you to have a stroll through the lanes of the historical town center to visit the Palatine Chapel, the Royal Palace and so much more. We suggest to dedicate Palermo AT LEAST one day before or after the tour for a self-contained visit.
We all meet up at our hotel in the afternoon. Around 7:30 – 6:00 PM we go and pick up the rental bikes (if any) and have a short but important briefing, the time to explain a few simple rules for organizing and synchronizing things, thus ensuring that everyone has a safe holiday.
A typical Italian welcome aperitif will be the right occasion to get to know each other.

Day 2: 210 km
At 9 AM we leave Palermo for a great start of our tour through the beauties of Sicily. We’ll start heading for Monreale and its splendid Duomo (cathedral, Unesco world heritage site) then we continue along the scenic route above the sea to visit the archeological remains of the charming temple of Segesta and then descend towards the sea and the historic tuna fishery in Scopello. From there we’ll begin the discovery of the Zingaro Reserve and San Vito lo Capo to then continue towards Trapani and its salt marshes and finally splendid Marsala where we’ll stop for the night.

Day 3: 240 km
We leave the sea behind us and breeze through olive groves and vineyards en route to the Belice valley, with the surreal ghost town landscape of Poggioreale, and dive into the world of “Cinema Paradiso” (best foreign film at the 1990 Oscars) and “Malena”. The last leg of this day brings us back to the sea and straight into the Magna Graecia to Agrigento’s mystical Valley of the Temples (another UNESCO World Heritage Site) where we’ll spend the night.

Day 4: 210 km
Again many curves towards the inland. We visit the Villa Romana del Casale, an early-4th-century villa and UNESCO site with huge, exceptionally well-preserved mosaics . Then we hit the road again, bound for Val di Noto and its fine UNESCO-listed late-baroque towns. Although all these centres had existed since the Middle Ages, they were rebuilt to suit late 17th-century tenets of architecture, decoration and urban design after a catastrophic earthquake reduced them to rubble in 1693. producing works of art, buildings, churches and late baroque monuments of great beauty, to a point that 14 of the 18 monuments of the city of Ragusa today registered in the world heritage are located in the ancient isle of Ibla, which by the way has more than 50 churches and numerous buildings in baroque style, where we’ll stop for the night.

Day 5: 170 km
A day dedicated to the late baroque between cozy villages symbol of this fascinating island. A day with less kilometers but with so much to see. We’ll begin with Modica and Noto (UNESCO world heritage) and we’ll finish with Siracusa and the beautiful island Ortigia (UNESCO world heritage). On top of all this a visit to the fascinating necropolis and/or among the ponds of the Cavagrande area. Overnight in Siracusa.

Day 6: 200 km
A few kilometers on the motorway will allow us to quickly reach the area that we want to explore today, that of spectacular Etna. So we continue our tour with a visit in the historical center of Catania to then dedicate ourselves to the unique sight of the majestic Etna (UNESCO world heritage) which is, with its 3340 mslm, the highest active volcano of the Eurasian plate. It’s on the slopes that we’ll stop for the night.

Day 7: 260 km
A day through some of the most enchanting villages of Italy, between sea and mountain, exploring the natural park of the Nebrodi mounts (the biggest in Sicily) straddling the Ionian sea and Tyrrhenian sea, savoring many exquisite turns, to then have a bite of the road which has characterized the known race “Targa Florio” before reaching another pearl of Sicily, the beautiful Cefalù, where we’ll stop for the night.

Day 8: 200 km
Get ready for some more serious riding in the mountains and by the sea. We’ll be motoring up and down through the Madonie Mountains up to 1600 m in the tracks of the historic “Targa Florio” and “Mille Miglia” motor race before reaching our city of departure, Palermo. A lavish farewell dinner is the perfect conclusion for this great adventure together.

Day 9: Farewell in Palermo
We say our goodbyes after breakfast, leaving you free to go home or explore further the magic of Sicily on your own or relax some days by the sea.

NB: The green parts apply to guided tours only!

Price per person for this 9-day and 8-night tour:

Minimum number of participants to confirm the group tour: 5 people
All our guided tours are limited editions for a maximum of 12 motorcycles

The price does not include:

ON REQUEST shipment of luggage via express forwarder

Price per person for this 9-day and 8-night tour:

The price does not include:

ON REQUEST shipment of luggage via express forwarder 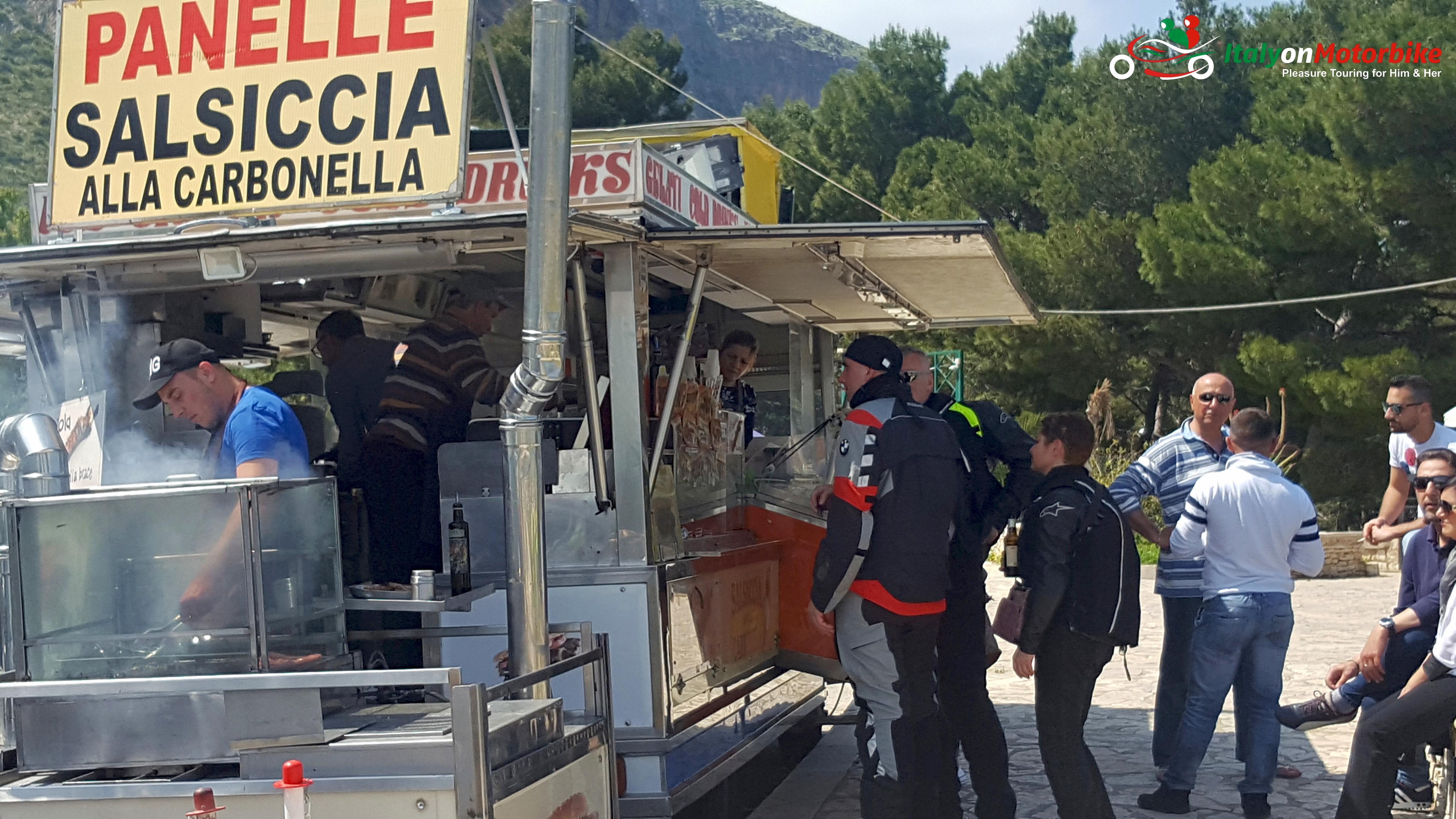 Request of information on this tour
Previous
Next